Inspired by some anomalous behavior in simulated DESC DC2 imaging, I started an
investigation of the difference between psf magnitudes and
CircularAperture_12_0 magnitudes (used for calibration) on calexp s.
This comparison is particularly important because the aperture correction maps
that are applied to all fluxes in both calexp source catalogs and coadd
catalogs are derived from this relationship. It turns out that there is
significant curvature in the psf - aper relationship. These plots use all the
stars used for the psf modeling across all 103 ccds in a visit, the same stars
that were used to compute the aperture correction map: 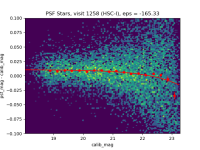 All of these plots are for some sample i-band images, but the problem is seen
across a wide range of bands and images, see
https://lsstc.slack.com/archives/C2JPXB4HG/p1576703633032000 and following.

Also notable is that the scatter is reduced if you do not apply the aperture
corrections to the psf fluxes, though an overall offset appears (as is expected
if you don't compute any aperture correction): 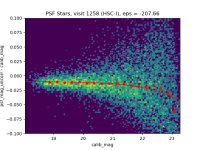 The shape of the curvature is consistent with that expected from a sky offset.
This is further demonstrated by comparing the psf - aper bias for different
aperture sizes:

Further investigation has shown that the bias is indeed caused by offsets in
the sky, and in fact are tracked by the LocalBackground estimation: 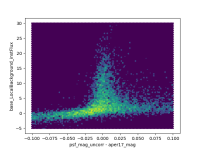 That is, when delta-mag (psf - aper) is negative, the local background is
negative as well (for faint stars where the background matters).

The basic problem is that we have (known) issues with the background in the
calexp images which we correct in the coaddition stage. However, these issues
create problems in both the photometric calibration and the aperture correction
computation which confuses the background problem (which is an additive
problem) with the zeropoints and aperture corrections (which are multiplicative
corrections).

A pragmatic solution proposed by Robert Lupton is to do what was originally intended:
only use bright stars when computing the aperture correction map.

I ran processCcd on a single i-band exposure where the aperture correction
was computed only with stars that were used for the psf modeling and had psf
s/n > 250. This of course does not fix the curvature, but leads to much
reduced scatter at the bright end between calibration and psf magnitudes: 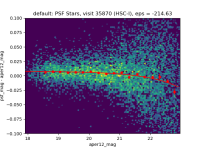 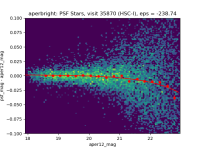 Finally, I ran all of VVDS i-band from RC2 through singleFrameDriver with
the new configuration, and ran validate_drp (without jointcal) for both the
RC2 "vanilla" processing from w_2019_46 and from the new aperbright
processing. The PA1 metric reduced from 23.6 mmag to 19.5 mmag, or a
difference in quadrature of approximately 13 mmag, which is quite a difference.