The following figure (x-axis: time in seconds, y-axis: value such as position in degree) shows this problem. There are two targets (positions = 1.2 degree and 3 degree. velocity = 0.01 deg/sec and -0.01 deg/sec). The track command does not continue after the time equals 6 seconds. We could see the rotator position is at 3 degree when time is at 8 seconds but the demand position is decreasing after time=8 seconds (rotator's position keeps the same) because of the second target has the velocity of -0.01 deg/sec. 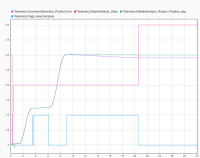 DM-25795 Fix the Bugs of Transition of Tracking

DM-25045 Review the Control Algorithm of Rotator in Phase 2

Votes:
Vote for this issue